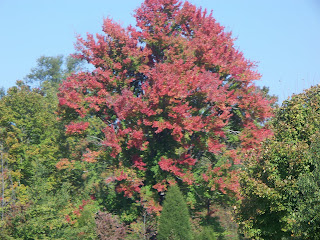 In Transit Day 3 Thursday, 4 October, 2012 During a map study last evening I discovered what appeared to be a very likely candidate for a fun ride today so we are changing our plan just a little. One of the “Joys” of Winging It. We had planned to go straight from Franklin, Ky to Linton Indiana and start our first “Official” ride in Southern Indiana tomorrow. With the discovery of Indiana Highway 66 which runs along the Ohio River at the bottom of the state, what better way to start riding Southern Indiana than to begin on the most southern road in the state.
We had to position ourselves to do this and changed up our route from Franklin, Ky to Indiana. We’d both had enough of I-65. After Atlanta, Chattanooga, Nashville, we weren’t about to take on Louisville. All those places have too many cars, moving way to fast on roads that need repair. We didn’t want to be past by people driving 20mph over the speed limit while they were texting, talking on the phone, drinking their Starbucks, combing their hair or reading a newspaper. We’d seen enough.
The twenty miles on I-65 from Franklin to Bowling Green wasn’t too bad and then we transitioned to the Hatcher Expressway which is a straight shot towards Owensboro, Ky, and a great road. Our get off destination was just below there at the intersection of Kentucky Highway 69. This was the positioning move because it lead us up to Cannelton, Ky which has a bridge to cross the Ohio River.
The ride north on 69 was pleasant and a little bit of a warm up for what was to come. It’s remote farm land with rolling hills. Cannelton itself is a very pretty little town nestled right on the river. The bridge was old and the crossing a non-event. I was concerned it might have a metal grating base but it was solid. I’ve never had a problem with the metal gratings on bridges, I’ve just never been comfortable with that little “Hooky Tok” dance the Goldwing does when crossing the grating. 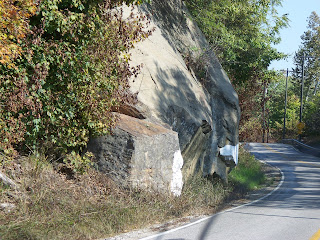 Immediately on the other side is Indiana Highway 66. It’s listed as a scenic route and boy is it ever. We turned east heading for Rome and Derby. It follows the river and there are some beautiful views, unencumbered by any development, it’s somewhat remote.
MORE PICTURES OF RIVER You start out heading east but eventually you are heading northeast because of the way the river wanders through the lower part of the state. Eventually Indiana Highway 66 runs right into I-64. It was 54 odd miles of twisty, windy roads with lots of elevation changes, beautiful views of the river and some spectacular fall foliage.
We have those high frequency whistles installed on the Wing to help protect us against deer, dogs, hogs, etc. and we needed them. For the first 35 miles of that journey we didn’t see another car but we scared hell out of several squirrels and two pretty good sized deer. They worked as advertized thank heavens.
We are both out of shape for that type riding and somewhat tired after to days of pushing hard to get up here so I was actually glad to see I-64. It was lunch time and we spotted a sign for an Amish style restaurant just to the west near the intersection of Indiana Highway 37. It made a very convenient luncheon stop and the food at the Schwartz Family restaurant was excellent.
After lunch we stayed north on 37 heading for Paoli to join Indiana Highway 150. We’d been on 150 before in a car and thought it would be a great motorcycle road but after 66 this morning that may not prove to be true, and it didn’t. There was lots of construction, lots more traffic, and just not as many curves and corners as we remembered from the car ride years ago.
At Loogootee, 150 intersects US Highway 231 and we turned north there heading for Bloomfield and Indiana Highway 54 which would lead us to Linton and Aunt Norma’s house, the end of our day.
You don’t often run across a name like Paoli or Loogootee for a town and Aunt Norma told us that Paoli was named after a Corsican General by the name of Pasqualie Paoli, what the hell he was doing in Southern Indiana was not explained to us and that Loogootee was a combination of two last names. It was part of the last name of the first Railroad Engineer to drive a train through the town and the last name of the family that had owned the land they put the railroad track through. Go figure, welcome to Southern Indiana. 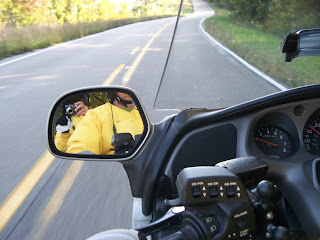