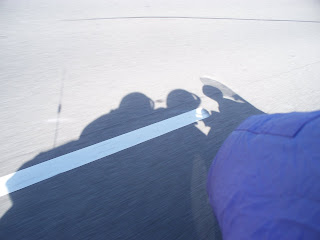 Today had a dual purpose. We were starting our eastward ride toward Virginia and an air show this weekend but our first leg was to meet up with our old buddy Jack Hinkle in Anderson, Indiana. Jack lives in Carmel, just north of Indianapolis, but likes to make the odd wager on the ponies. We also enjoy the same things so the natural meeting point would be at Hoosier Park in Anderson for an evening of Thoroughbred appreciation.

We also wanted to make a quick visit to some old friends in Franklin, Indiana, MJ and Larry. The temperature this morning in Linton was 47 and at 60mph the equivalent wind chill was about 29 degrees. During the day the temperature climbed all the way to 52 which helped raise the wind chill to a bone numbing 32.5 degrees. 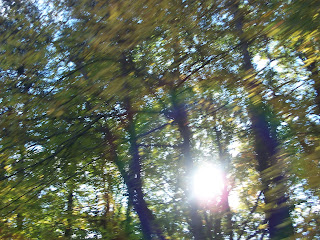 I usually say that any day on the Wing is better than not, but I just might make an exception for today. The wind was from the North/Northwest and our direction of travel was East by Northeast. The wind was a steady 20mph with gusts over open farmer’s fields that were 25 to 30. It was just not fun. I told Hink when we met up in Anderson that if I hadn’t promised him I’d be there that we and the Wing would have been on I-65 heading south just as fast as we dared in search of warmer temperatures.

Franklin was about half way so our visit with MJ and Larry was very well timed and they actually built a fire in the fireplace for us to warm up. I sat with my back to the fire during most of the visit. It was great to see them and it made it even harder to get back on the Wing and head on to Anderson. 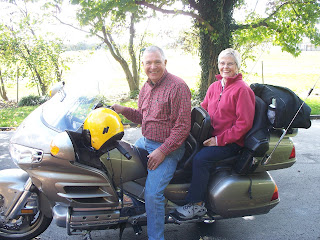 Our route from Linton was Indiana Highway 54 to 45 to Bloomington. The Highway 46 and a beautiful stretch to Nashville and then on to Columbus and the intersection of I-65. By the time we reached there, physical pain from the cold had set in. It took another 20 minutes or so getting to Franklin and then our warming visit with MJ and Larry.

It was about another 70 miles on to Anderson and we finally arrived at a few minutes after 4 PM and noticed we had a message from Hink that he was on the way. A real quick change and we were picked up and taken to Hoosier Park in time to make those all important decisions for the first race. Although we never got warm until we got back to our motel for a long hot shower, we had a great time with Hink and his son John and actually came away with a couple dollars extra. 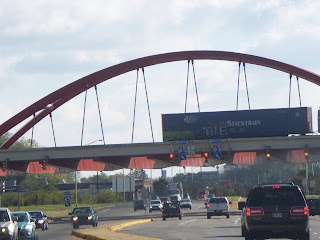 Tomorrow will be another “gut” check, the morning forecast is for 34 degrees. It may become untenable and we just might give up and head south, won’t know until the morning.
Posted by Winging It at 4:08 PM