This morning in Waynesburg the temperature is a “Mild” 42 degrees, compared to yesterday morning in Anderson, IN, that’s a welcomed improvement. We are about 270 miles out from our destination. The forecast high for the day is 54 degrees and it won’t get warmer because of a very thick and wide spread overcast. 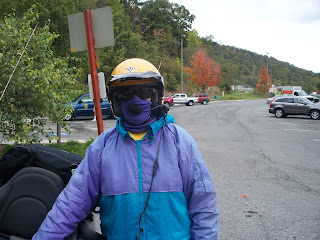 We left the motel at exactly 0930 heading south on I-79. If it weren’t for the gray skies the scenery would be beautiful but the overcast dulls the brilliance of the fall foliage. It’s a fairly quick trip down to I-68 East. I would classify this part of the trip as a “Ride”, not just making miles. If you live close enough to this stretch of interstate it’s a great place for motorcycles. It’s not the windy, twisty, country back road type ride, but nonetheless it has some great twists and turn, huge elevation changes and some spectacular views despite the overcast.

We keep increasing in altitude and as we do the temperatures continue to decrease. I noticed an elevation sign that read 2880 feet and checked the temperature, it was now 39 degrees. That makes the wind chill 24 degrees. I am involuntarily shaking a little and Marguerite informs me that “She’s not having fun at the moment.” Thankfully we are over the top of mountain and now heading down the eastern side. I keep checking the temperature as we descend, and we can feel it without looking. It’s amazing how much just a three or four degree rise reduces the wind chill. 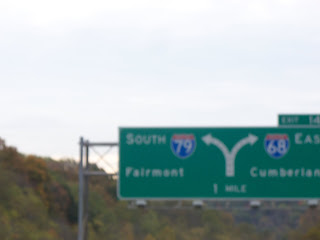 At the intersection of I-68/70/522 we take the 522 south exit, and are off the interstate for the day. Highway 522 will take us straight to Culpeper. We’d decided to stop at the first place we came to for food and warmth. Very quickly after heading south on 522 we came to the small town of Berkeley Springs, West Virginia. The first thing we saw after the town sign was a McDonald’s. Not exactly the best place to manage your weight watcher points but they do have very hot and very good coffee. So Mickey D’s it is. 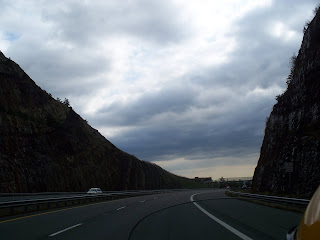 While we are sucking up the BTU’s ( British Thermal Units, a measure of heat) as well as the hot coffee and a McDouble off the dollar menu we have the opportunity to see a few of the locals pop in and out. The first of three unusual characters is wearing a western style pistol holster,with large pistol and an impressive amount of .44 caliber ammo in the belt. On the left side of the holster belt he has a very large hunting knife. He has a beard that comes almost to the middle of his chest, and a pony tail hanging out from under a baseball hat. He’s wearing blue jeans and some type of almost knee high boots with the pant legs of his jeans stuck in the top of the boots.He has a T-Shirt that says he’s a BAD DUDE. No one but Marguerite and I seem to take any notice of him.

Just a few minutes later another gentleman came in. He’s a very large man, six foot four or five, probably two hundred and forty pounds, a well proportioned fellow. In the waist band of his Wrangler Jeans he is carrying what looks like a nine millimeter pistol of some sort, possibly a Bretta. As we are leaving the restaurant there is an older gentleman sitting by the door and he is also wearing a pistol on his hip. It’s in a clip holster attached to the belt on his trousers. We know we are just barely in the state of West Virginia and both joke that this would be a bad neighborhood for armed robbers or terrorists.

Back on the Wing and heading south on 522. There’s a little nausea getting through Winchester, according to the map there was supposed to be a bypass but we never saw it. Instead, we followed the 522 signs right through town and it took a lot longer that we would have liked. The good news is the temperature has come up all the way to 57, the bad news is the wind has also picked up again and it’s cold. 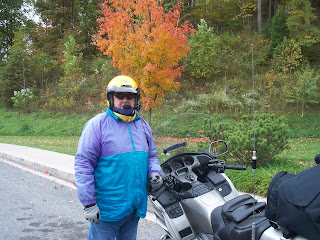 We roll into Culpeper at 4PM and find the motel without much trouble at all. Our hosts are good to their word and as soon as we tell the motel clerk our last name, we are given a nice room. We unload, unpack and weight for our Harrier buddies to come back from an air show practice at the airport. It’s a great time to warm up with a nice long hot shower, and catch up on the blog entires.
Posted by Winging It at 8:12 PM