The New Wing: A Work In Progress 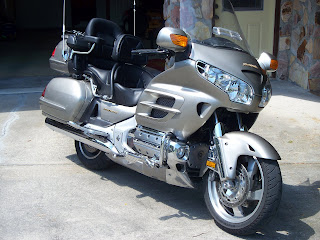 In 1988 we purchased our first Goldwing; it was a one owner 1985, 1200 cc Aspencade. It didn’t take long before we realized we loved “Winging It” and July 1989 we traded in the Aspencade for a brand new 1989 Goldwing 1500. We kept it over twenty years, put over 100,000 miles on it and in 2008 we even rode it from Florida to Alaska and back. We loved that machine and had some great adventures with it but we were starting to have problems with maintenance. It wasn’t that the Wing kept breaking or that we couldn’t get parts, it was because we had trouble finding mechanics that could perform the maintenance. I’d learned to do the minor stuff, oil changes, etc. but rear tire replacement, master brake cylinder work, something that required a lot of disassembly was something the “new guys” weren’t familiar with and some really didn’t want to try. It seemed very strange to have owned and operated a machine for so long that mechanics would now have had a 21 year career and retired.

So on the 8th of June, 2010 we traded in our faithful companion for a one owner 2003 Goldwing 1800 with barely 24000 miles on it. I would have said it was in “Pristine” condition. It came completely outfitted with bags and several other aftermarket add on’s. There’s one thing we’ve learned for certain about Winging It and the Wing itself, and that is the machine is a very personal item and will always reflect some element of the person or persons that ride it. So it’s not just a question of getting a new Wing (meaning new to you) and riding home, it’s a question of getting a new Wing and making it “Your” Wing.

This machine had custom chrome foot pegs, I prefer highway boards but decided to go with the pegs this time but had to readjust them to fit me. The rear seat reclined too much and put Marguerite in an awkward position that gave her a back ache. There were rear rider arm rests installed and she definitely didn’t like these at all. Not only did she not like them while riding but found every time you wanted to open the rear compartment the arm rests had to be swung out of the way.

On our test ride we really didn’t like the machine. Mechanically it was wonderful. The 1800 had a little “Attitude” and handled like a dream. The dual disc brakes feel like you can stop it on a dime, and provide a little change. From a hardware standpoint it seemed bullet proof. However, ergonomically we didn’t like it and so initially we told the salesman the machine simply didn’t fit us and our style of riding. We take short rides but mostly we tour. I mean why in the hell if you are building the number one touring motorcycle in the world would you make the storage compartments smaller? DUH!! But, after thinking about the age of our old Wing, and the lack of maintenance expertise we knew in our hearts that the change had to be made. The salesman was really surprised when we came back and said we’d do the trade.

It didn’t take him long to get into action on the paperwork but we both found it rather curious that one of the first things he did was start phoning around to find a home for our old Wing. He made a couple calls and put the wheels in motion and then went into work in earnest on our paperwork. There was some stuttering around about money and financing that seemed to slow the process but when I told him it was our old Wing and CASH he was less hesitant. Marguerite also informed him we wanted out of here in less than an hour, job finished, on the road. He got the message. We were out of the dealership in just under forty minutes and our old Wing had also found a home with some guy up near Wildwood, Florida that was buying older Goldwings and turning them into Trikes.

We took the long way home, enjoyed our first ride on our new Wing and confirmed the issues we discovered on our test ride. The rear rider position had to be changed so that Marguerite was comfortable, after only sixty miles her back hurt enough that she was ready to get off and walk. The rider’s seat back that was installed had very bulky mounting hardware on the sides of the seat and rubbed heavily on the inside of the rear rider’s legs. The arm rests for the rear rider looked good but Marguerite didn’t like those from the moment she got on board for the test ride and I didn’t like them either. I thought they were cumbersome when trying to get on or off the Wing. We aren’t little people, I’m six foot and Marguerite’s five foot nine. The arm rests might not bother a smaller person.

The Wing had a factory windscreen which after riding for years behind an extra tall Markland windscreen, seemed way to short for me. The very top of the screen was directly in my line of vision even with some adjustments, and I felt we both needed way more protection. The foot pegs were all right, they just needed to be re-positioned. So, what do you fix first? Just to make sure we took a couple more short rides, we call them breakfast rides, usually out fifty miles and back. After those two rides there was no doubt in my mind what was going to be fixed first, the rear riders position. When you are on a LOOONG TOURING ride, if the rear rider isn’t happy, NOBODY’S gonna be happy.

We started looking into the seat fix and discovered that we weren’t the only 1800 owners that weren’t happy with some of the ergonomics, especially the seat. When we started asking around you could tell by the number of aftermarket seats available that there were problems with the comfort of the rear rider’s position, especially if you were tall.

We went several places, rode up to Daytona and had an entire seat installed for the day. That didn’t work and didn’t seem worth the money anyway. We tried a couple different rear rider seat backs and they didn’t work either. We finally figured out that it was the tilt of the seat back that was the culprit. The factory seat base was fine, but the rear rider’s seat back reclined at too great an angle. If you hit a bump no matter how small, the rear rider’s spine was not vertical, and unfortunately human spines don’t seem to be able to absorb much shock in a non vertical position. For taller or longer waisted people I think it made the problem worse.

After almost a month of experimentation we finally found a solution for two problems. We purchased just the rear rider seat back from Mustang as well as a front rider seat back that mounted through the main seat, avoiding all the bulky hardware on the sides and allowing for more leg room for the rear rider. The Mustang rear rider’s seat back was the most vertical we could find and allowed Marguerite to sit up into a much more comfortable position. We could have gone after a whole new seat, but the base factory seat worked well and I didn’t have much trouble mounting the rider’s back rest through the seat base. You have to cut a hole down through the seat which made me a little nervous but in about an hour the whole thing was finished and we were ready to ride, much more comfortably.

We took a ride up to Jacksonville to visit our old riding buddies, Mel and Lou, and show off our new Wing. We knew the side compartments were smaller and so were the bags but after a little experimentation with our packing arrangements we could manage. By a little more efficient use of the bag that fits on the luggage rack we could carry most of what we consider standard equipment for a long ride.(rain gear, extra jackets, cleaning gear, tire gauge, Wing Cover, and small bag of repair items, electrical tape, crazy glue, sun block and small socket set.)

During our ride to Jacksonville we encountered a small rain shower, a little heavy but short in duration. This solidified the need for a different windscreen. On our old Wing we had an oversized Markland windscreen. It stuck up far enough that if we ran in rain neither of us were hit by rain directly in the face. It all went over the top of our heads and we never really got all that wet unless we had to stop. With the standard windscreen adjusted to the full up position we were both being hit by enough rain in the face that our visibility was greatly reduced and we got fairly damp in a short period of time.

There are a lot of aftermarket windscreens for all models years of Gold Wings and after a fairly exhaustive search we settled for a “Plus Four” oversize windscreen that we purchased from Chris Chrome.com. We gave it a couple test rides, didn’t find any rain showers to ride through but could tell by the wind pattern that we had the final piece in place. The Wing was now “OUR” Wing. 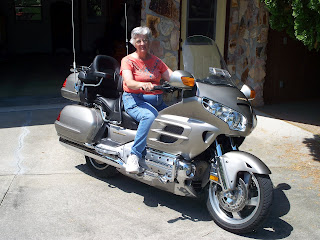