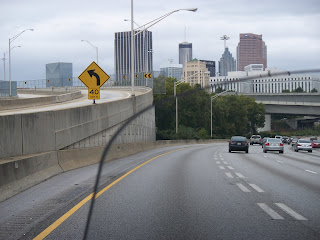 IN TRANSIT: DAY ONE

Well the day finally arrived and we were both up early after a reasonable nights sleep. The forecast weather was “Iffy”. A huge front was draping down all the way from about Atlanta to the western edge of Florida. It was scheduled to move across Florida and eventually clear Atlanta by about noon. It wasn’t raining in Clermont, a BDO (Pilot term for Back Door Observation) showed blue sky for the moment and some really scary looking black clouds to the west. We figured if we got going quickly enough and hauled “Boo Tey” we could stay ahead of the bad JuJu that was obviously coming our way.

The good news was we were underway quickly and left the driveway at 0745 and on the turnpike heading north fairly quickly. Ninety miles later we were in Gainesville and the weather ahead was ominous to say the least. We pulled off and broke out the rain jackets, decided not to go for the pants as well and it was a fortituious stop because the bad weather was moving so quickly that by the time we were back on the road, all we had to deal with was a wet interstate.

We continued to “Haul Boo Tey” up I-75 in fairly light traffic and made good time and made a stop at a Krystal Burger in Valdosta. We are trying to do the “Weight Watcher Point” thing so we had an 11 point brunch which consisted of one Krystal Burger, 4 points and a bowl of chili for 7. Safe enough for Brunch.

Other than the odd sprinkle we ran in clear weather most of the day and at a Macon fuel stop made the big decision of the day to keep going and get on the north side of Atlanta. Our best guess was that if we kept the “Hammer Down” we would hit Atlanta about 3:15 in the afternoon and the traffic would be minimal compared to the 5 O’Clock rush hour or the early morning rush tomorrow. Marguerite said the by-pass was for sissy’s so we went right through the middle. Motorcycles are eligible for the HOV lane. We got in the HOV, stayed there and tried to keep up with traffic. The posted speed limit was 55 or 65 depending what part of the city we were passing through, I was running 70 to 75 in the HOV and “They” were “Blowing my doors off”, if I had any. We popped out safely on the north side and for two seventy year olds that haven’t been on a long Wing ride in two years, we managed to make almost 500 miles, 492 to be exact.

Using the motelcoupons.com book, we found a suitable inn for the night, a Days Inn to be exact and called it quits. We are next door to a Shoney’s and I can’t wait to see what they have to offer in the way of low weight watcher point meals. One the way to the motel I made one crucial stop for some adult beverages and came up with the bargain of the day, a six pack ofCoors 16oz beers for a mere $5.00. There are 3 weight watchers points apiece. So, after racking up 9 points while doing my homework for the day, we are looking forward to dinner and another great day tomorrow on the Wing. Hopefully a stop to see a high school friend and her husband, maybe even and horse and buggy ride, and an evening in Bowling Green with some of Kentucky’s finest at the end of the day.
Posted by Winging It at 3:40 PM