Ok, I know we said we were gonna rest over the weekend, but we couldn’t resist. Except for
being cold the weather is just too gorgeous. We had to delay till 11AM because it was 42
degrees when we got up and it’s only 47 now so we are going to don our heavy jackets and put
the rain gear on top of that, and then hit the road.

We’ve decided to find a somewhat historic land mark to the east of Linton. It’s the longest
railroad trestle in the world, was built in 1906 and is called the “Tulip Trestle” because it’s in
Tulip, Indiana. Tulip had a post office that was opened in 1850 but closed in 1906. We don’t
expect to find much when we get there if we find it. From the directions and a look at the map
it’s more than somewhat remote.

We leave Linton heading east on Indiana 54 and the wind over the Wing is just plain cold,
damn cold. Maybe after we cold soak for 30 minutes or so we won’t notice it so much but for
the moment the wind hurts our cheeks.

We’re good through Switz City but now have to come up with a plan to dodge the “Apple
Festival” at Bloomfield. Marguerite spots a sign that says it won’t start until after noon so we
stay on 54 and slip right through town. In the last 48 hours the cold weather has really colored
up the leaves on the trees.

At the intersection of Highway 54 and 43 we turn north heading for Solsberry. It’s another
one of those beautiful little windy roads flowing over gently rolling hills and the trees are even
more colorful that on Highway 54. Solsberry is very small, almost not recognizable as a town
at all. Our map doesn’t show enough detail and the county road signs aren’t all that obvious.
There are some guys working on a house so we ask for directions to the “Tulip Trestle”. They
point to an unmarked road at the only intersection in town and tell us to follow that for 5 miles
and be sure not to take any side roads.

We think we are on county road 375 but we aren’t sure. It’s difficult to enjoy the road or the
scenery because of the horrible condition of the road. It’s like riding in Alaska in places; you
don’t dare take your eyes off the road. It’s a very long 5 miles but finally we reach the trestle.
There were some doubts for a while that those guys back in Solsberry were just having some fun. 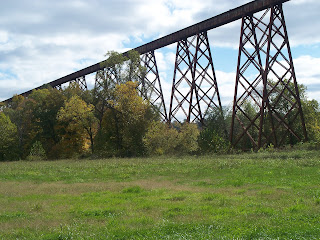 Against our better judgment we take a small solid gravel road to try and get right to the base of
the trestle and it works but it will be a tough turn around. Marguerite gets her pictures and I get
the Wing turned around and ease back to the hard surface road for more bone jarring bumps to get out of this area. 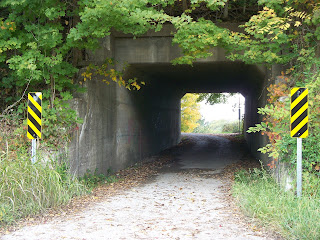 Its 1:30 and we are hungry. The choice is the Amish restaurant we’ve seen on US Highway
231 just north of Loogootee. The good news is it’s only about twenty miles on good road. The
bad news is, it‘s closed. Plan B is to go into Loogootee and check out the bill of fare available
there. It’s Sunday, that keeps coming back to haunt us, we are hungry and very cold, to the bone.
We know McDonalds has great coffee, hot, very hot coffee, so Mickey D’s it is. We decide that
along with the coffee we will risk a few weight watchers points on a sandwich. I choose fish,
Marguerite goes for chicken.

She wanted the Southern Fried Chicken Sandwich. She got something on a bun, stained
with mayonnaise and a pickle. I got a sandwich in a fish sandwich box, it had cheese and tartar
sauce just like most McDonalds fish sandwiches but this was not fish. It was some sort of spiced
up, highly over cooked chicken. I debated about taking it back. If they had people back there
that couldn’t tell chicken from fish, I wasn’t sure I wanted to risk it. However, the coffee was
delicious and we had refills. So much for lunch.

Even after two cups of coffee and a half hour chance to warm up we are still chilled to the
bone but decide to take the long way back to Linton in hopes of finding just one more hidden
jewel of a road to ride. Out of Loogootee we find that jewel, its county road 450/158. It’s
twisty, turny, has a couple special railroad underpasses, it’s great and the surface isn’t in too bad
shape. It leads up all the way up to Highway 37, then Oolitic, then Highway 54 again and back
to Linton. We pull into Aunt Norma’s a 4 o’clock and I forgot to check the mileage. We are
frozen but glad we made the ride. Marguerite tells me she’s taken 101 pictures so she’s got some
editing to do as soon as she warms up. It’s wine time and maybe after a few adult beverages
we’ll both recover. 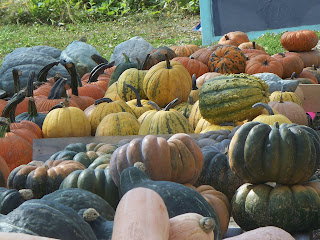